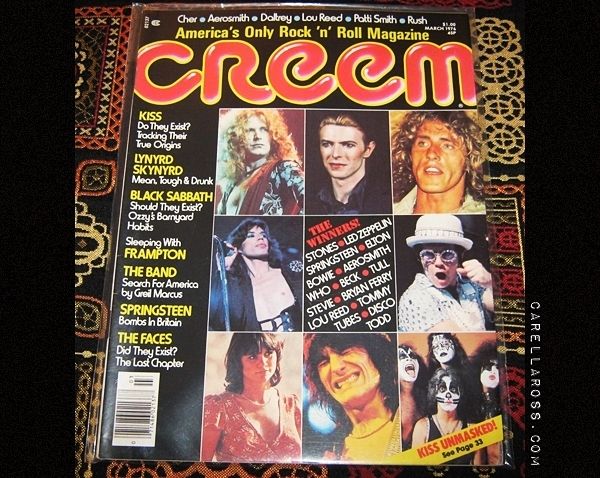 This album made me so morose and depressed when I got the advance copy that I stayed drunk for three days. I didn't go to work. I had a horrible physical fight with my wife over a stupid bottle of 10 mg. Valiums. (She threw an ashtray, a brick, and a five foot candelabra at me, but I got her down and sat on her chest and beat her head on the wooden floor.)

I called up the editor of this magazine (on my bill) and did virtually nothing but cough up phlegm in an alcoholic stupor for three hours, wishing somewhere in the back of my deadened brain that he could give me a clue as to why I should like this record.

I came on to my sister-in-law "C'mon over and gimme head while I'm passed out." I cadged drinks off anyone who would come near me or let me into their apartments. I ended up the whole debacle passing out stone cold after puking and pissing myself at a band rehearsal, had to be kicked awake by my lead singer, was driven home by my long-suffering best friend and force fed by his old lady who could still find it in the boundless reaches of her good heart to smile on my absolutely incorrigible state of dissolution...I willed her all of my wordly goods before dropping six Valiums (and three vitamin B complexes, so I must've figured to wake up, or at least at the autopsy they would say my liver was OK). Well, wake up I did, after sleeping sixteen hours, and guess what was running through my head, along with the visual images of flaming metropolises and sinking ocean liners foaming and exploding in vast whirling vortexes of salt water...

Which is supposed to be the single off Coney Island Baby and therefore may be a big hit if promoted right, 'cause it's at least as catchy as "Saturday Night"...if they can just get four cute teens to impersonate Lou Reed.

Now, when I was younger, the Velvet Underground meant to me what the Stones, Dylan, etc. meant to thousands of other midwestern teen mutants. I was declared exempt from the literary curriculum of my upper class suburban high school simply because I showed the English department a list of books I'd glanced through while obsessively blasting White Light/White Heat on the headphones of my parents' stereo. All my papers were manic droolings about the parallels between Lou Reed's lyrics and whatever academia we were supposed to be analyzing in preparation for our passage into the halls of higher learning. "Sweet Jane" I compared with Alexander Pope, "Some Kinda Love" lined right up with T.S. Eliot's "Hollow Men"...plus I had a rock band and we played all these songs, fueled pharmaceutically by our bassist who worked as a delivery boy for a drugstore and ripped off an entire gallon jar full of Xmas trees and brown & clears. In this way I cleverly avoided all intellectual and creative responsibilities at the cleavage of the decades (I did read all the Delmore Schwartz I could steal from local libraries, because of that oblique reference on the 1st Velvets LP). After all, a person with an electric guitar and access to obscurities like "I saw my head laughing, rolling on the ground" had no need of creative credentials...there was the rail-thin, asthmatic editoress of our school poetry mag, there was the unhappily married English teacher who drove me home and elsewhere in her Corvette...there were others (the girl who began to get menstrual cramps in perfect time to the drums in "Sister Ray"). Who needed the promise of college and career? Lou Reed was my Woody Guthrie, and with enough amphetamine I would be the new Lou Reed!

I left home. I wandered to the wrong coast. (Can you imagine trying to get people in Berkeley, California to listen to Loaded in 1971? Although maybe they all grew up and joined Earthquake...) When Lou's first solo album came out, I drove hundreds of miles to play it for ex-friends sequestered at small exclusive midwest colleges listening to the Dead and Miles Davis. Everyone from my high school band had gone on to sterling careers as psych majors, botanical or law students, or selling and drinking for IBM (Oh yeah except the drummer became a junkie and had a stroke and now he listens to Santana). All the girls I used to wow into bed with drugs and song married guys who were just like their brothers and moved to

Florida or Chicago, leaving their copies of Blonde on Blonde and White Light in some closet along with the reams of amphetamine driven poetry I'd forced on them over the years. By the time Metal Machine Music came out, I'd lost all contact. The only thing that saved me from total dissolution over the summer of '75 was hearing Television three nights in a row and seeing The Passenger.

So all those people will probably never pay any attention to Coney Island Baby, and even if they did it wouldn't do much for what's left of their synapses. The damn thing starts out exactly like an Eagles record! And with the exception of "Charlie's Girl" which is mercifully short and to the point, it's a downhill slide. "My Best Friend" is a six year old Velvets outtake which used to sound fun when it was fast and Doug Yule sang lead. Here it dirges along at the same pace as "Lisa Says" but without the sexiness. You could sit and puzzle over the voiceovers on "Kicks" but you won't find much (isn't it cute, the sound of cocaine snorting, and is that an amyl popping in the left speaker?). Your headphones would be better utilized experiencing Patti Smith's brilliant triple-dubbed phantasmagoria on Horses.

Side two starts off with the WORST thing Reed has ever done, this limp drone self-scam where he goes on about being "a gift to the women of this world" (in fact this whole LP reminds me of the junk you hear on the jukeboxes at those two-dollar-a-beer stewardess pickup bars on 1st Ave. above 70th). There's one pick up point, "Oo-ee Baby" with the only good line on the record "your old man was the best B&E man down on the street," but then this Ric Von Schmidt rip-off which doesn't do anything at all.

Finally there's "Coney Island Baby." Just maudlin, dumb, self pity: "Can you believe I wann'd t'play football for th' coach"...Sure, Lou, when I was all uptight about being a fag in high school, I did too. Then it builds slightly, Danny Weiss tossing in a bunch of George Benson licks, into STILL MORE self pity about how it's tough in the city and the glory of Love will see you through. Maybe. Dragged out for six minutes.

Here I sit, sober and perhaps even lucid, on the sort of winter's day that makes you realize a New Year is just around the corner and you've got very little to show for it, but if you are going to get anything done on this planet, you better pick it up with both hands and DO IT YOURSELF. But I got the nerve to say to my old hero, hey Lou, if you really mean that last line of "Coney Island Baby": "You know I'd give the whole thing up for you," then maybe you ought to do just that.